A sailboat under the New Year sunrise over Wellington. Photo by Steve Collier, 2015.

Living in Wellington, New Zealand we were excited to learn that this is the first city in the world to see in the new year. In the UK, celebrating the New Year usually means freezing cold weather, rain and either a trip to the pub for drinks with friends or perhaps a venture to London to see the fireworks over the Thames. The bridge between 2014/15 would be the first time either of us had spent the day abroad and so it seemed appropriate to make it especially memorable. We couldn’t go away as Steve was working on both New Year’s Eve and Day so we decided to stay in Wellington and venture to the top of Mount Victoria where at 196m we were sure to have an excellent view of the sun rise from the East.

Sunrise was due around 5:30AM so after watching the midnight fireworks from the rooftop balcony of our apartment block we grabbed a few hours sleep before our early start. At around 5:15 we drove (hey, we wanted some energy for the rest of the day!) to the top where a sizeable crowd had already gathered most of whom were not native Wellingtonians! As well as lone travellers, groups of friends and impatient backpackers some of whom left before the sun even appeared, we were surprised to find a group of worshippers from a religious movement celebrating the new year with chanting and prayer for what must have been at least an hour and a half- they were still there after our departure. We didn’t catch the name of the order but it seemed to be a homogenisation of Maori, Christian and new age beliefs. The chants added a surreal and slightly mystical feel to the occasion and we certainly admired the dedication.

Christian influence on top of a mountain. Striking image. Photo by Steve Collier, 2015.

The light on arrival was stunning. Purples and blues brushed the skies and a white neon cross on a tower silhouetted in the foreground gave the scene a sense of being in a Nicolas Winding Refn film! The mists over the Rimutaka Range to the east beyond the Miramar peninsula added to the wonder and with the slight cloud, mist and hills, the sunrise was bound to be impressive.

With increasing brightness, those purples an blues turned to vibrant oranges and reds as the hidden sun illuminated the sky. Slowly, a ripple of gold as the sun greeted us followed by a dramatic burst. The new year had dawned and the future seemed limitless.

We stayed on the mountain for a while as the light bathed the hills behind us and the city below. The ferries and flights transported commuters across the water and through the air around us. A beautiful sight. The concrete surrounded by forest and sea.

Oriental Bay, Wellington on New Year’s Day, 2015. The water that day was the calmest we’ve ever seen. Photo by Steve Collier, 2015.

After descending from Mt. Victoria, we decided to head to Oriental Bay, a small but pleasant man-made beach set along the winding esplanade heading out of Wellington. A scattering of leftover revellers dotted the strip but the sand was untouched and the water was the stillest we have seen it with barely a ripple on the surface- perfect for the hard core swimmers who we watched traverse the bay seemingly lacking any kind of fatigue! Nic decided we should write something in the sand. A happy new year message.

We gathered a couple of sticks and began tracing lines in the sand when a man introducing himself as Mike appeared and asked if he could join in and elaborate on the design. What followed was twenty minutes of Maori inspired line work in the sand and a brief but wonderful connection with a fellow we will most likely never meet again! One of the true joys we’ve experienced travelling is meeting people. 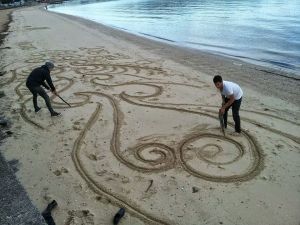 Steve and Mike drawing in the sand. Photo by Nicola Attridge, 2015.

Returning home it was time for a feast worthy of celebration. Blueberry and banana pancakes with chocolate peanut butter of a batch we’d had since our visit to Tauranga! Lovely.

There were so many moments during this day which seemed special and the feeling that 2015 would be purely travelling free is something we’ll never forget.

Have seemingly ordinary moments transformed in to something special for you? Let us know.

Until next time, happy travels!