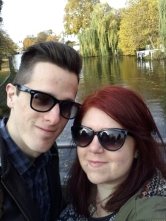 We’re Nicola and Steve, two everyday folk from the UK who, one day in January, 2014, decided to take the plunge and head off on an adventure to the far side of the world! That was our first taste of long term travel and since returning we still travel as much as possible.

We travel on a modest budget, hoping to work here and there to top up the funds, and on the way, we’ll be chatting to local people, fellow travelers and anyone we can whilst hopefully imparting some useful tips and knowledge along the way.

Travel is exciting, a learning experience, slightly terrifying and an absolute dream.

Yes we’ll visit the tourist parts of the world. They’re major attractions for a reason after all. We really want to get under the skin of each place, learn from local people and explore as much as we can. Hidden temples to simple cafes. Pristine beaches to comic book conventions and music festivals. This will not be the usual travel blog for sure.

Join us as we make inevitable mistakes, become frustrated, tired and are taken out of our comfort zone whilst having the best time of our lives!

Where have we been?

Why “A Couple Of Beers?”

We had a running joke that each bit of money we manage to save would equate to the cost of a couple of beers in a country where it may be more expensive. Even if that amount is £80! Plus, we’re a couple. It’s a ridiculous incentive and also something which always brings a smile to our faces. We aim to enjoy ourselves and relax while traveling as well as pack in as much as possible so it also relates to just taking the time to absorb the location rather than take a bunch of photos and move on. Plus we like beer!

One thought on “About”