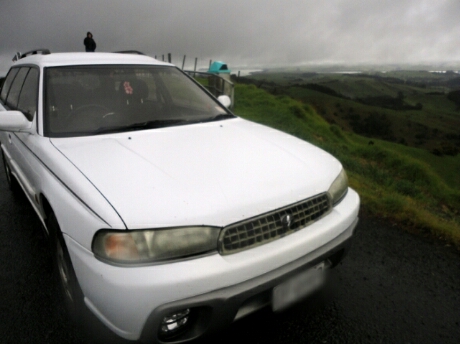 One of the biggest decisions we made before travelling to New Zealand was whether to buy a car, rent a camper or try and travel using public/ backpacker transport. The main factor affecting this decision was that before travelling in August 2014, neither of us had passed our test! Yes, we left it pretty late compared to a lot of our peers to get on the road but we hadn’t really needed to before and the cost of running a car in the UK at that point presented a tricky financial prospect. Public transport in the UK is pretty decent if a tad expensive at times (we’re looking at you Chiltern Railways!) but it still worked out more cost effective than running a car. With the possibility of not being able to drive while travelling lingering in our minds, we decided to create a plan A and a plan B much like cartoon villains. Cue maniacal laugh…

Plan A: Driving. Buy/ Rent.
Plan B: Public Transport (we never really had to do this after a few weeks)!

Note: Steve managed to pass his test the day before we travelled after failing the first time a few months before! No pressure.

To rent or buy?

We put a lot of research in to this to make sure we reduced the chance of wasting valuable funds. It’s also worth noting that at the beginning of the trip, although we had working visas ready to go, staying long term in New Zealand wasn’t a definite so a quick whip around of the main attractions could be the way to experience the country. This would mean we would head to a location using public transport and then rent a car for a trip when it was deemed necessary. After looking at the costs involved and reading the opinions of other travellers, we decided to buy regardless of the length of our stay in NZ. The flexibility of our own car- to be able to travel where and when we wanted- was far more valuable in a country where public transport still isn’t consistent and wide reaching enough to let you go off the beaten track and find places that aren’t necessarily in the guidebook.

The cost involved with renting a car or campervan, even for a few months would eat up a lot more of our budget than if we simply bought one with an eye to reselling (even at half the price) before leaving the country. Say you rent a car for NZD$30 a day for ninety days. That’s NZD$2700 for a small car. You can buy a really good car for under NZD$2500 and have it for as long as you want. Ours was actually NZD$2200 including NZD$600 worth of maintenance done by the seller for no extra cost as we met his asking price. The seller also included a gas cooker with an extra can of gas, a mattress (in this car even Steve can comfortably stretch out in the back to sleep), and a camping table. There are similar and even cheaper deals on cars just as good if not better than ours available and you’ll see these cars for sale parked up in large numbers as you travel the country.

Most of the cars you’ll be looking at are cheap Japanese imports and you’ll see a huge number of Subaru, Mitsubishi, Nissan, Toyota and Honda cars roaming the mountain roads in search of an epic camp spot. A lot of these cars won’t come with manuals but you can find and download any of them after a quick search on Google. There are still features and buttons we have never used and probably won’t need to! Petrol is currently hitting extremely affordable prices due to the global dip in crude value which is great if you’re on a budget. We’ve seen prices go from as high as NZD$2.50 per Unleaded litre to currently around NZD$1.75 and there are ways to knock off more money which we’ll discuss at a later date.

Our particular trusty steed is a Subaru Legacy Grand Wagon (estate car for those in the UK), 4WD, Auto shift. It’s a late ’90’s model, well maintained, has good handling, good resale value and was exactly what we wanted for our travels. Having been in NZ for around five months (and counting) at the time of writing this post we’re really glad we decided to buy a car, take it slow and even nestle down in Wellington for a few months to work and save.

Why has buying a car been so invaluable?

Firstly, freedom! We have been able to go anywhere we want without having to rely on timetables or buying tickets etc. If we spot somewhere along the way that looks fun to explore, that’s exactly what we do. Would we have seen the sun set while standing on giant sand dunes on our way back from Cape Reinga? Nope. Would we have been mobile enough to reach accommodation in the stunning Whangarei Heads or Ahipara without a lot of extra difficulty? Nope. The whole point of travelling is to get out there and see the world. If there is a way you can see more while spending less then you should always take it. 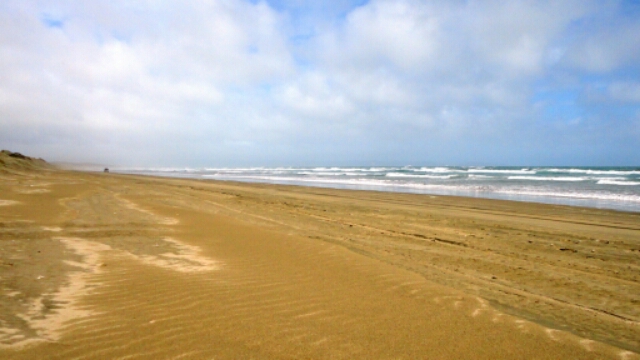 Budget. As previously stated, we spent far less money on buying than if we had rented. By now our rental charges would be on their way to two to three times as much and those extra dollars will carry you a long way. Our car has saved us money on accommodation by being able to freedom camp too. Point to note: buy a long car! A sporty two-seater will be the death of your budget sleeping options unless you’re packing a tent. The only thing you need to be careful of is making sure you give yourself time to sell the car at the end of your trip. Start advertising early with a convenient pickup date listed. If you’re not able to sell your car this may impact your budget for future travel so take care of it and buy wisely.

Ride sharing. With our car, we’ve been able to take trips with friends on the spur of the moment without having to schedule them around bus/ transport options. This has added to our experience of the country and enjoyment of sharing them with friends no end. Road trips with mates are ace. No question.

Blending in. There is a problem with car theft in New Zealand as any other part of the world but particularly around car parks based at the beginning of walking tracks. Having a big ol’ camper van is basically like putting a sign up saying “everything I have is in this vehicle, please take it.” Yes, there are still risks with having your regular car broken in to and a lot of times that can be attributed to leaving valuable items out on show but if you own a car that is inconspicuous and (let’s be honest, for the price you’ll be paying) a bit worn in, thieves are less likely to target you. New Zealand is also a land of dangerous driving and if you’re driving a camper van, you will be more of a target for hair raising overtaking manoeuvres and verbal abuse from everyday Kiwis who will automatically assume that you are a stupid traveller. Also, if you’re planning on working and you turn up to an interview in a camper the employer is more unlikely to hire you as it will be assumed you’ll be leaving soon.

Buying a car in New Zealand is easy. You simply look for ads or have a look at roadside sales, give the seller a call/email and meet up for a test. After that, if you decide to buy, you can negotiate a little bit and then it’s a simple matter of the seller and you filling out an official form each and handing it in to a Post Office. That’s pretty much it. We’ll go in to more detail on the process in the next post but this was our first experience of buying a car and ignoring a few technical challenges regarding transferring money from the UK it was incredibly easy. Did we mention it’s easy?

So there are some pointers on why buying a car while travelling New Zealand is definitely a better way to explore. In our next post, we’ll look at how we bought our car and some tips to help you find the best and most reliable deal.

As always, if you have knowledge to share on the subject, maybe you disagree and think renting a camper is the only way to go then get n touch, either in the comments below or via our Facebook page.

Until next time, stay tuned!

One thought on “Buying a Car to Travel New Zealand Part 1: Why?”