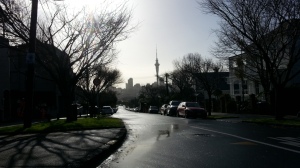 A winter view from Ponsonby towards Auckland CBD. Photo by Steve Collier

Auckland is residence to the largest percentage of all Kiwis and is also the main port of entry for travellers so it’s no surprise there are a huge number of hotels, hostels and everything inbetween on offer. The main reason for the huge population is the sheer size of Auckland. Outside of the CBD, the city stretches in all directions, swallowing up multiple suburbs, each of them offering a different perspective on life within this melting pot of cultures and lifestyles.

We knew it would be important to secure a place to stay before we flew out so our minds could rest easier knowing our bodies would soon be able to shed the jet lag without having to trudge the winter streets of Auckland for hours in the vain hope of finding somewhere in our budget (low).

Using trusty Hostelbookers, we chose to book four nights at Ponsonby Backpackers located just off the main street in the titular, hipster-friendly suburb. The building itself is an imposing affair and resembles the sort of old wooden construction you might see in a horror movie with turrets set against forks of lightning vaguely illuminating a mysterious figure at the window! Inside, it’s simply another hostel though. We booked the double room which was well priced considering the slightly run down decor and drafty single glazed windows but multi bunk dorms are available for cheaper. The sound of Ponsonby Road’s nightlife drifted through our window occasionally but Kiwi bars tend to close earlier and aren’t as overtly rowdy as the ones we’re used to in the UK and after exploring the city all day you probably won’t find it hard to fall asleep. The lounge area is warm, cosy and has a great bay windowseat area with a map of the country on the table- a great way to inspire and discuss your next adventure with fellow travellers- a television with Sky, books, comfy sofas and a warm fire. It’s a great place to relax in the building. The kitchen is well organised and rules on food storage and cleaning are well followed. There are clothes washing facilities available for a couple of bucks and a neat garden area with heater lamps (another couple of bucks). The showers and toilets are clean with regular cleaning schedules in place. The staff were excellent while we were there and they were more than happy to take the time to make sure we got the best out of the city and start our long term adventure. You can book tours through them and a list of events happening in the vicinity is updated to include anything you might be interested in such as night markets or significant rugby matches (All Blacks of course!) during your stay. We had a fun night watching the rugby with a few ciders and teaching a Spanish and an Italian the rules of the game then being shown a video of Calcio Fiorentinno and instantly changing our views on what makes a tough sportsman!

Ponsonby itself is pretty cool and although it carries a reputation as an area where groomed beards and coffee culture are a way of life that’s not a bad thing at all. This road is home to great food, drink, entertainment and shopping and the architecture and tree lined streets are pleasing to the eye too. Although Ponsonby is viewed as a pricey area which it can be- we paid $15 for a bottle of Rekorderlig cider at one bar- it also has places to eat and drink that suit all budgets which is the same as anywhere in the world. For instance, on the same road we bought the same cider for under a third of the price and actually cheaper than some UK supermarkets!

A couple of places in the area we enjoyed that deserve a shout-out are Snatch bar and grill who run a weekly stand-up comedy open mic night that occasionally features pros testing out new material which more than makes up for the overpriced drinks. The other place is The Chapel bar and bistro where you are guaranteed a great night of food, drink and music any day of the week.

Public transport via regular bus services is really easy and cheap to get to the city centre at $2 a ride.

There’s also an awesome cafe/ restaurant on one of the roads leading off Ponsonby set in an old chapel that does an excellent breakfast and great coffee but we went to it on the first morning after we arrived and forgot to make a note of the name! If you know the name, let us know!

This is why we made sure we had accommodation pre-booked after our flight because honestly, we needed the sleep!

If you have any recommendations for places to stay, eat or things to see in and around Ponsonby, let us know and we’ll try to check it out.